Time from Concept to Finished: 2 months

The concept was the most important thing to me. I have to laugh in order to know that my audience will laugh when they read it. Especially when working in comedy, you have to remember when you got that first laugh. After a while you get so used to it and it stops being funny to you but if you can remember the first laugh you know you are good.

While trying to develop my reel I had to choose what type of spot I wanted to become known for. I spent a lot of time going over scripts and genres but what really clicked for me was Comedy-Dialogue driven spots. I feel like comedy and character driven spots are what most people remember when they get back to their show or movie, and I just like to make people laugh.

Lastly, and I learned this after the fact, but Hunger Inside was written by the writer of my first spec, Dan Sorgen, so getting to work with him again was a big bonus in my book.

What Went into the Location?

We scouted a few locations but ultimately decided on the room we were in because of the amount of extra space around the table that we had to work with, plus, above the table was a small metallic lighting track that had some standard 60 watt lights in it. My director of photography, Jon Meredith, had the idea to build a rig out of PVC Pipe that would fit between the metal rigging and the ceiling.

The location is the board room at the Hacienda Hotel in El Segundo, it's actually the same hotel that my wife and I had our wedding reception in, so we had some previous connections to the room and that allowed us get in for a good deal and a lot of flexibility. We owe a lot to the owners of the hotel and the manager for being so gracious with us.

The lighting was done completely with china balls, we had about four 30" balls that were hung from the ceiling via a custom made PVC rig that Jon had hung, around the china balls was a curtain of black plastic that cut off a lot of the light from hitting the outside areas of the room. It's actually a very ingenious way to light the room and I have to give my DP a lot of credit for designing the look of the spot.

One of the problems we ran into was the color of the wall, which was a horrible coral. I hated it, and I wanted to keep it out of frame for as much as possible. So my designer had the idea to hang some white cloth that was pleated from a drop cloth rig and we moved that up and down the wall as needed to make it look like that wall was a window or just simply curtained off area. This worked out really well and kept most of the color from the wall out of sight, we had to have it in some of the shots and we were lucky enough to have the turn out to be a little more of a tan color in the final color grade.

The color scheme was chosen early on. We wanted to keep all of the executives in black and white and have the speaker be in a pale, very submissive, blue. I wanted to get a lot of contrast between the executives and him to make him stand out. Ultimately the room kind of dictated the colors as well, we had to work around the color of the table and the wall, but after the grade it ended up looking very nice together.

What went into casting?

My producer, Lex Edelman, and I held casting calls for three weeks. A lot of no shows, but a few interesting people. A lot of the guys who came in to audition for the role of the speaker ended up working better as an executive, including Vinnie Van Hinte who turned out to be a great looking executive and a very talented actor.

After three casting sessions and still no speaker (but a lot of executives) I had a meeting with one more actor, Jason Moatz, who came out to the location during a scout and auditioned for us. He wasn't perfect at the time but he had the look and he understood the character more than the others, so we chose him. A few rehearsals later and Jason and I were on the same page, he brought a lot of interesting quirks to the character as well that I think really made it come to life. Jason was a lot of fun to work with, and I'd jump at the chance to get him back on my set.

We over-booked the amount of executives, because this is LA and people flake all the time, but everyone that we booked actually turned up on the day of the shoot and we had way more then I thought we would. I really ended up with a great group of talented actors and actresses who really brought the concept to life.

On the post side of things I worked with a new editor, Liam Johnson, for the first time. I came from being an editor for the past few years and it was really tough for me to let go of the editing reigns and let someone else come in. But ultimately I feel like, as a director, you need to be able to give up at some point and let other people come in and give their creative eyes to it. A lot of filmmakers out there try to be a one man band, and I have a lot of respect for them, but that's not for me. I love collaborating and I love to see what new creative ways people see the same project that I see.

Thoughts on directing it?

I had a blast directing this. From the moment I read the script I had this demonized hunger interrupting a meeting in my head and with the help of Jason, Jon, Lex and the rest of my cast and crew I was able to bring it to life in the same way that I envisioned it, which is always a great validation as a director.

There were really no big problems that came up, we had our share of hurdles to over come but we got in early and hit the ground running, wrapping early. So early that we were able to go and scout a location for my next spot. 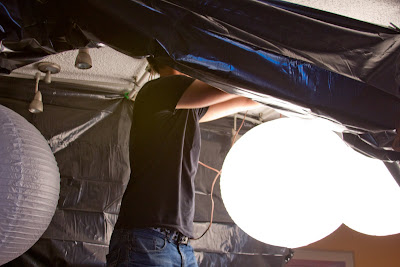 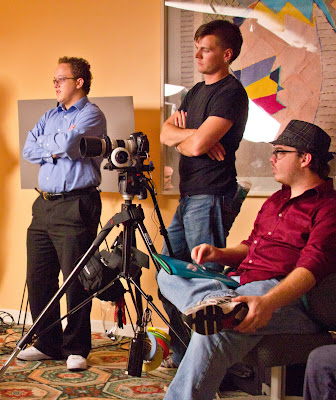 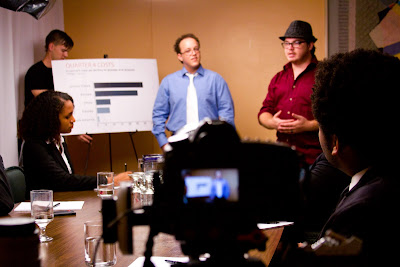 Posted by SpecBank.com at 3:11 PM No comments: