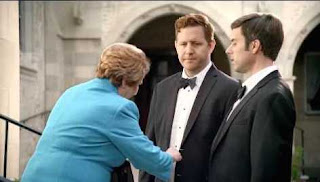 I think I read every comedy script on Spec Bank and this was my favorite! Written by Shiraz Gani, it’s a gem that works on multiple levels. It has conflict and the joke is structured perfectly by setting up an assumption and then pulling the rug out. Like any great advertisement, it’s simple, clear, shows the product benefit, and is perfectly on brand. For a comedy director this kind of script is a playground for creating characters, working on all the fantastic subtext, and developing the visual language that’s going to support the story and make it even funnier. And when the idea is so strong, there’s a freedom to experiment and try out funny ideas around without being afraid that the concept will collapse.

Through my work in comedy I knew Actor Gary Anthony Williams and producer Stacey Wilson, who are both connected with the Groundlings.They introduced me. And what a brilliant cast! You might recognize Lynne Stewart from her role as Miss Yvonne on Pee Wee’s Playhouse, and as Charlie’s mom in It’s Always Sunny in Philadelphia. Then Matt Marr and Karl Ramsey are brilliant as the couple. They created distinct personalities and a interpersonal dynamic that I think all couples can relate to - so that we care about  what happens to them. They also had to be angry but weary at the same time, so there has to be a little bit of, “I can’t believe we have to deal with this again, especially on our wedding day.”  And at the same time being a little measured for fear of it getting out of hand and ruining the day. Then for Lynne, she had to be believable before and after the reveal. The audience can’t feel like we cheated in the misdirection. At the end you have to go back and think, “oh, she was just a stickler for appearance,” and have her performance work for that too.

I couldn’t afford a scout or pay a substantial location fee. And since I don’t live in L.A. my search included literally clicking through every church I could find on Google Maps in the LA area and looking at the street views. Stacey helped out a ton by visiting many of the places as well. Architectural qualities, being able to shoot in three directions, noise levels were all factors. I had very specific features in mind, the most important being the steps leading up to the doorway where the confrontation takes place. The church lady standing above the couple gives her character the dominant position. We finally hit the jackpot with St Albans in Westwood. They were incredibly supportive. It has this great patio which looked beautiful from all three camera directions and that nice row of arches as a background for the couple’s walk at the beginning. It also made staging, blocking and crew logistics very easy.

The DP, Benji Bakshi, was recommended by a mutual friend, director Dave Green. Benji was incredible, talented, efficient, he lit the scenes beautifully, and I liked that he did not just tell me what I wanted to hear. He got involved early, and pushed me to expand the budget for additional crew and lighting gear. I balked at first but it’s honestly not worth doing a spec spot if it doesn’t look like real work. And in the end he was right. The weather changed all day long and he and his crew were able to control the conditions beautifully because they had the necessary team and equipment.

The shoot was a joy. That’s a credit to the cast, Benji, producer Stacey Wilson, and the entire crew. I could focus completely on the actors and we had a lot of time to improv, try to find just the right emotional tone and even test out alternate lines.

I think it’s important to make a spec spot look like a real commercial and luckily some awesome folks donated their time. Lenny Mastrandrea is the head colorist at Nice Shoes and, well,  the images speak for themselves. Then we had Brian Goodheart at Sonic Union who did a perfect job on the sound mix. The only unexpected thing was adding a little sky replacement in the first and last shots.

Because there’s always things you want to differently on every job, it feels really strange to say that this was a rare exception that exceeded my expectations. I met Shiraz Gani and Barbara Graetzer, the creative directors who came up with the concept, months before we actually shot. We had a lot of time to develop the script, continually revise the boards, search for cast and location, think about the who the characters were and really talk through every detail. Stacey, our producer, came on board about three months ahead of time.  By the time we got to the shoot, we were incredibly prepared and then the cast and crew took it to the next level. You rarely get that opportunity.

The response has been overwhelmingly positive. As of today, the spot has over a million views on my director page. It’s been featured in Time, Adweek, Fortune, AOL, Huffington Post, and even on several news broadcasts because opposition to same sex marriage is still very much front page news. The comedy comes from upending the viewer’s assumptions and it’s terrific that progress is hopefully moving faster than our expectations. There’s a laugh in the wonderful sigh of relief both for the on-screen couple and for the audience.
Posted by SpecBank.com at 3:29 PM No comments: