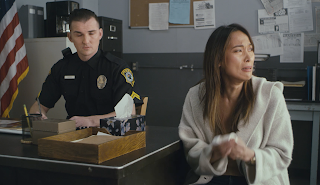 This script stood out to me because, in a way, it was exactly what I was looking for and I could immediately see how it would play out visually.  Also, I audibly laughed while reading the spot and that's very rare for me (often it's just a huff and a chuckle.)  I attribute that to the absurdity of the spot, and I just respond the best to commercials in that realm.

The casting process was luckily very easy in the way that we were searching for looks rather than dramatic delivery or anything like that.  So I wanted unique and quirky looking (vs drop dead handsome or beautiful) characters that really looked the part so that they'd just inhabit this timeless bullpen we shot in.  Luckily again, everyone clicked in with the treatment and script and got exactly what I was going for.  Made for a very easy and fun day.

The location I had actually shot on before (or on some of their other sets) down in Anaheim at Silverdream Factory.  So because I knew the staging of that location and knew that I could afford it, that actually really helped me pick this script and be confident that I could pull it off.

The crew and the DP are all friends of mine and we've been doing music videos or styles that were not always taking us in the direction that best suited us.  So the core crew I really approached with a question of "Let's do something that really excites us again."  For myself that was the most important thing that had me motivated through directing it, doing the production design, picking up equipment, etc etc.  But additionally, I was certainly asking them to really help me out and (because we've been friends for some time) they obliged for little or no money at all.

Shooting went great actually.  Though our one mini crisis turned out not to be in the end.  Our main actor had to run to a callback – mid shoot – and then got stuck in traffic on the way back.  So we shot out his wide coverage and anything involving whole arms or face then let him go.  Then I had the makeup gal cover up my tattooed arm and I did all the close ups of the paint brush against the canvas.  That ended up being extremely streamlined because the DP and I would set up the shot and just roll without having to literally micro direct brush strokes.

Editing and finishing were where the shoestring budget ended haha.  I edited the whole piece, which is one of my favorite parts, and then my DP and I colored the spot.  And coloring is the bane of my existence.  I don't know how colorists do it.  But overall, post went well since I shoot for the edit on set.

I think I would have not used the haze machine in hindsight, haha.  Old habits.

Final thoughts: I'm very happy with it.  I got to spend the time to make something I was genuinely excited about without having to rush at all.  In the past, I've crammed two different 30s spots into one day and they really did both suffer in one way or another.  I'm very happy to be able to share this one with as many people as I can.
Posted by SpecBank.com at 9:32 PM No comments: 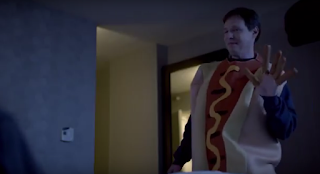 I love comedy, the more absurd the better. I was really impressed the way the writer set up the scene and punch line, all in 30 seconds.

The casting process went remarkably smooth. I had previous experience with the Actors Access website so I went back to it for this project. I believe the quality of responses you receive is predicated on the quality of the script. So it didn’t surprise me when I started to get a lot of really good actors responding. Because there are no lines in the script, there was no official ‘audition’. It ended up being a short meet and greet.

I’m new to Los Angeles, so I decided to network at some of the City Chamber’s events to meet new people. I met the marketing director of one of the Marriot’s. After coming up empty handed searching other location sites, I asked him if it would be possible to shoot the spot in one of his rooms. He agreed and offered a generously discounted rate for the room. Moral of the story, get out and network!

I posted something on Mandy and Craigslist for an editor. Cal responded, and after a good initial conversation, he asked if I was looking for a DP and camera crew. He had some friends he could suggest. After looking at their reel, I talked with Brendan and I was set with an editor and camera crew within a few days. So luck was on my side again.

I have been on some rough shoots and was fully expecting this could be another. I earmarked about 8-10 hours to shoot. When we got to the hotel they had changed the room, so we had an initial scurry to get everyone to the correct room. And once we got into the room, it was much smaller than it looked in photos. Even with a small crew and cast it was very tight. On top of that, the windows were blacked out so there was not a lot of fresh air moving through the room. But once we got into the room, things started to run smoothly. It ended up being a 6-hour shoot.

The editor and myself thought we could get it done in two weeks. It ended up taking around two months. Throw in day job, additional sound cues and feedback from other crew, it added up. I didn’t mind. We were all on the same page of ‘lets get it right.’

Overall, I couldn’t have been more pleased with the shoot. As I mentioned earlier, it went remarkably smooth from start to finish. But in hindsight, I would have put more emphasis on costume design. Checking the location before the shoot would have given me an idea of possible problems, etc. And after each shoot, I take some time and go through each phase to see what needs to be improved for the next shoot. It always comes down to, preparation.

This was my first project with Spec Bank and couldn’t be more pleased with its resources, scripts and community. What a great place to be if you’re trying to build your reel and develop relationships within this industry.