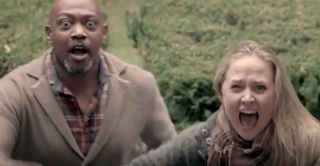 The script spoke to me immediately. I am a fan of outrageous, over-the-top comedy in commercials, the kind you see come from Geico. I also felt it would be doable considering the budget I had to work with.

I've made a few shorts and one award winning feature film in the past, and the casting process for those previous films were nothing like the casting process for this commercial. Since I had working relationships with so many actors, I just cast actors I knew. The dentist Keith Johnston starred in my feature film (Pro-Black Sheep) and in my most recent short film (Grey Dawn). He's talented and great to work with. I figured I would cast my son to play the son and his classmate from Pre-K to play the daughter, who I have seen perform in a school show and thought she would be a natural. We're close with her mom and knew her dad was also an actor, so it was a no-brainer to ask him to play the father in this commercial. As for the mom, she was referred to us by an actress friend who couldn't do the weekend we planned on shooting. And there you have it...

I just used my mother's house here in Brooklyn.

My friend Ellie, who also starred in Pro-Black Sheep, is doing graduate studies in film at Columbia University and I asked to see her reel to choose a DP she worked with. Kimberlee's clip was the shortest on the reel but I knew right away that she can help get the look I wanted for this commercial. The production sound mixer Brian was referred to me by one who I worked with on Grey Dawn.

Shooting went really well. The easiest thing I ever shot so far in the 17 years I've been picking up the camera. The only problem was the lawn people using a leaf blower in a neighboring house around the corner. I had to go to them a few times to let them know we were shooting and that the blower is ruining our sound. They were respectful about it. Unfortunately, it was the neighbor that demanded they do more. Eventually, they were finished and the sound was fine. The best thing was the overcast I desired for the production. It was great.

I had my editor Kyra Uniejewski edit the film without me present. She edited my latest short but now lives in Jersey. Being at her place wasn't necessary. She would do a cut and I would give her notes, back and forth. There were at least 4 to 5 rounds of this until we got it just right. She's good like that. Then I turned to Carlos "Storm" Martinez, an aikido buddy of mine, who did sound editing for such films as the 2010 Oscar winning short film God of Love. Like my editor, I wasn't present to walk him through post sound. It wasn't necessary. He did 2 cuts with notes and it was done. I worked with colorist Donato Boccia who was referred to me by Kyra for my short film Grey Dawn. Again, I wasn't present. He gave me 2 samples and that was it.

More coverage. It wasn't necessary for a 30 second spot but it never hurts.

The original spec didn't have the parents running away, screaming, abandoning their children. I thought of it and ran it by Daniel Gray, the copywriter. He thought it would be funny so I did it. And Keith Johnston as the Dentist improvised the "You want some candy" line in the end.
Posted by SpecBank.com at 5:13 PM No comments: