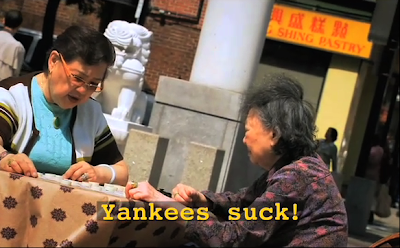 Dave had hit on a nerve in the community with the "Yankees Suck" chant. But it is pretty obnoxious, and obnoxious isn't a great selling strategy. We discussed the initial concept, which was a single spot focusing on a crowd that starting chanting, and realized the concept could be explored further by using the tag "Just another day" and creating several scenarios that spanned the course of an entire day. We were able to keep the recognizable chant, and channel the obnoxiousness into a charming little spot. Although I live and work in LA, the key to the spot was going back to Boston to shoot it. I'm committed to creating work that feels 'real', and you just can't double that feeling in LA. It was also on the verge of lunacy, but we held on this side of reason, so the idea feels edgy, rather than 'specky'.

Initially we had a non-union casting session. But due to the enormous success of New England becoming a viable alternative to shooting in LA, all the experienced talent was SAG. Kevin Fenessey Casting suggested we go SAG. Because of the sheer number of talent, it seems cost prohibitive for a viral spec spot. After having an eleventh hour conversation with the SAG local, we came to understand that if this was an Internet-only spot, we could shoot under a SAG agreement. So we recast as a SAG show, and voila, we were able to cast twelve principals and fifteen extras as a SAG show. Shout out to SAG New England for making this possible.

Because it is a vignette spot, we really had our back up against the wall in terms of budget. But "Red Sox" is a get-out-of-jail-free card. We scouted several diners, but nobody really wanted us in their hair. Years ago I had frequented the "Town Line" diner, but it is such a classic location, and in such demand for movies, etc., that we thought there was no way they'd let a small job like us shoot there. For grins we went in to scout, and the owner just happened to be in the place. We told him our story, and once we said "Red Sox," the seas parted. The diner was actually open and operating while we shot.
The Chinatown scene is a whole different animal. Chinatown is a very, very closed society, very difficult for a major film to shoot on the streets. However, John, the producer, had recently produced an anti-gambling spot specifically for Chinatown, and he had the relationships to make it happen. Although we were insured for the street scenes, we didn't have enough time to officially close the streets - so we stole it. And while we where shooting, the police on duty actually came up to us and told us they knew what we were doing, and if we needed anything, to let them know. I was spooked they'd shut us down. Hey, forgot about it, Jake - it's Chinatown.
The bedroom scene was perfect – and the home owner is also the singer in the producer's band.
How did you select your DP, crew?

The DP Pat Kelly and I go way back to the 90's. Once he saw the boards, he jumped onboard. He wrangled a small run-and-gun crew and gear. Pat shoots a lot of stuff for ESPN and NESN on the street, so he wasn't fazed a bit. Did a fantastic job of lighting the bedroom with minimal gear. I had worked previously with the production designer, Amy Whitten, on some regional spots, so she really came to the show doing a lot, with a little - if you know what I mean.
How did shooting go? Any challenges?
Only the moment in Chinatown when the police approached us - I was sure we were finished. Almost dropped dead when they said, "Anything you need, we'll do it." The talent was great - and the little girl at the end is going to work more than Shirley Temple and Andy Hardy put together.

Andy Schrader and I have cut almost three hundred spots and promos together. He burst out laughing when he saw the boards, and wanted in. Although we cut here in LA, we sent cuts back to Dave in Boston, so the editorial was a very collaborative process. Leslie Sorrentino at The Syndicate, Santa Monica was great about cutting us a deal for digital finishing and coloring - and he's a Yankee fan!!
In retrospect, is there anything you would have done differently?

I would have gone SAG right from the start if I thought it was affordable. It was - but it took an entire casting session to figure that out. The talent was fantastic, the locations genuine, and the crew was awesome. Really not much I would have changed if we were getting paid
our full rates to do the job. Honestly. And I think that's an important thing - because you can't say down the road, "Well, if I'd had XYZ, it would have been the right way to do it." People see what is on your reel, end of story.
Any other thoughts.

Yes - thanks to the Spec Bank for the boards. There are a lot of new directors (maybe some established ones, too) looking for good ideas to shoot, and it's hard to hook them up with creatives who have ideas they'd like to see realized. I'm trying to really focus on my specific 'brand' or vision as a director, so consequently I'm very picky about the ideas I shoot - and that's not a knock on the quality of concepts. Rather, it has to fit in with what I'm trying to accomplish, so although I might really like a script, it may not fit within the parameters of my reel. So the wider the net to catch boards, the better result for both the creatives and the director.

Finally, I'd like to say that although this is a director-driven business, it ain't about one person. Without all those great friends that help us out, we're just crazy street people howling 'cut' and 'action' in the wind.
Posted by SpecBank.com at 10:51 AM No comments: