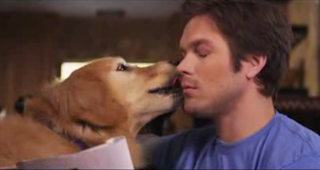 Why this script/concept? How does it reflect your vision as a director?

I chose this script because I loved the twist in it.  The reveal gives the concept a bit of an edge, which I always like to have, and most of the humor leading up to it comes from a place of discomfort.  Alex's script is really funny, misleading and almost surreal until the big punchline and twist.  And it also has a dog, and dogs are consistently awesome.

The casting process was fun, but it was a bit strange for this concept because we were never playing the lead guy against an actual dog.  We didn't want to overwork Sophie or her owner Lauren, because they were doing us a favor by agreeing to the spot at all.  So for casting, we had human couples run through the scene, with the girl doing the nuzzling and snuggling that a dog might do.  We didn't make any of our actresses lick the actors' faces, though.  But that meant we had to take the actors at their word that they wouldn't have a problem with a dog going to town on their faces.  Brian and Kelly were actually a couple during our initial auditions, then we mixed up most of the couples for callbacks, but we realized they had worked really well together, so we reunited them for the shoot.

I only asked three people if we could shoot in their living rooms, because my apartment is too boring and doesn't have the right look.  The first two said a polite no, and the third was Becky, my producer.  She came through huge on that and on everything else.  Her house and furniture are really nice and charming, and she didn't even charge insurance or location fees.  Thanks again, Becky and roommates.

I've worked with a lot of the same key crew for most of my specs.  I met Rick the DP and Joe the editor while we were all at USC, and they have great senses of humor on top of their skills.  I love that they help provide a consistent feel to these spots.  Rick shot with his Red Epic, and he's constantly booked, so I'm surprised he wasn't too busy to help me out again.  More about Joe below.

The main challenge was finding a rhythm while filming with a happy but hungry Golden Retriever.  Sophie was great, but she was distracted at first by seeing her owner/mom, Linda.  So Linda actually offered to go off-set and read a book near our crafty and make-up areas.  And as long as we kept plenty of cream cheese on the side of Brian's face, Sophie was happy to participate.  The hardest part was getting her re-set to her starting marks, because we filmed most of her takes in series; we didn't want to lose her attention or energy with a lot of downtime.  Brian did a great unsung job of nailing his lines, putting up with messy cream cheese and dog tongue, and wrangling Sophie during takes.  We gave him a wrap gift of mouth wash, a lint roller and whiskey.

Joe did a great job with the edit.  He put a good rough cut together right away, and he was really patient and willing to go through the footage with me to find some unexpected solutions.  He basically built the dog's "whoa" moment from a take that I had thought was our third or fourth best option originally.  Now, that's the moment I keep laughing at the most.  Things really started clicking when Joe laid the music out and edited the lyrics to match our gags.  Suddenly, our pace got a lot better, the spot had a lot more energy, and we were able to fit every moment from the script into an actual :30, which I really wanted to nail this time.

Brian and Sophie finally did have a quasi-rehearsal the day before we shot.  But I still should have done a better job of preparing Brian for how we were going to shoot in lots of series, and I should have warned him better about how unpleasant that repeated sensation would get.

I just want to thank Alex again for his great script.  He and I talked a lot and collaborated closely the whole way through.  He was really open to trading ideas back and forth.  We even changed the product in his script from Ice Breakers Pacs to Frost, because Frost is a brand new product.  Alex was also open to using a different song, which I thought I might actually end up doing.  But it's a credit to his script that "This Magic Moment" worked perfectly as the music, and that's what he had built into the concept all along.Why
Posted by SpecBank.com at 10:49 PM No comments: 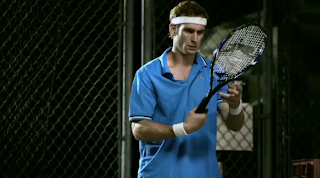 We love tennis, and we loved the idea of combining comedy elements into a sport/action concept. It was a great way to show how we like energy and motion, but at the same time be focused on performance elements and telling a story. I love spots that tell stories as well as deliver a message. As far as the vision, its all about the story. I am more interested in that than just making people laugh or cry or cheer. If you can do both, then that's the best combination.

We looked for someone who was a regular joe, but you would believe could walk onto a tennis court. He had to be fit, able to actually hit a ball with a racket, and perform while doing the actions. So we went for an actor first with tennis skills being a second requisite. If we just used a tennis player, the struggle of the character wouldn't have worked. We pulled talent from outside of our region, so we had little chance to audition them. I would call them and just strike up a conversation with them after they had seen the script, and really had to choose based on the instinct that the actor could not only pull it off, but also take direction very well.

We had quite a few batting cages in the area, but most were very old or tacky looking.  We found one that had the cages up on a hill away from a driving range.  It allowed for a nice wide void of space with great stadium lighting as the back drop. This way when you first established the scene it really could be a tennis club or court area.

Kuni is a DP I work with regularly, and he was also looking to do some great night action sports work so he volunteered to help us with the project. The crew was a collection of favors from the normal crew base we work with on a regular basis on other commercial work.

The biggest challenge was actually safely hitting a baseball with a tennis racket. We went through 20+ rackets. I tested the different speed cages first when we location scouted to see which speed was the safest and easiest to read on camera. The actual fast ball launcher almost broke my thumb and ripped the racket clean out of my hand. So we ended up using a 50 mph cage.  It still broke the strings and in some cased cracked the racket.

We shot a ton of coverage. So editing was more about finding those best quick moments. We started with a 60 second cut that told more story had more of a build up, but in talking with the writer, the 30 second cut was more pure, told a more concise story and after getting his fresh eyes on it, his notes made a big difference in helping finish a 30 second version.

I would have loved to had the budget to do a few high speed shots of the ball actually shattering a stunt racket, but that required more money and fabrication than we had the chance to do. But other than that, it was exactly what we wanted to accomplish on our budget.
Posted by SpecBank.com at 10:39 PM No comments: