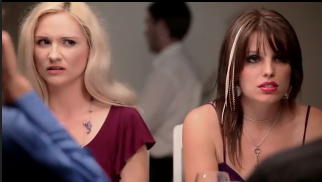 
The concept was crucial for me. I think that you can really judge a director based on what concepts he chooses to direct as well as how he directs them. Finding a solid concept that worked for me was important. The script for this commercial made me laugh out loud when I first heard it, and I think it's important to do the things that make you laugh. Dan Sorgen had written a fantastic script and come up with a great concept, and that's what drew me into directing it.

I thought long and hard about what type of director I wanted to be, I watched and studied other commercials until I found what niche I wanted to specialize in. It was a matter of finding a script that fit into that niche, comedy dialogue with multiple characters.

The type of comedy in the spot really resonated with me as well, I'm a big fan of reaction comedy and situation comedy. I don't think that what an actor says has to be funny. The laughter should come from the situation and reaction of those around him. That's what makes me laugh, and this concept had that.

I had previously directed four commercials that I felt were not my best work, the concepts I was doing were much too large to fit a 30-second spot. I decided that I wanted to focus on one joke in 30 seconds and this Virgin Mobile spot fit into that box very well.

It wasn't until after I read and optioned the script that I found out that a similar concept had already been produced with much success by Bo Mirosseni, a director that I respect very much. That only solidified my choice.
What Went into the Location?
The location was really the toughest part, I had envisioned the spot taking place at a nice restaurant at night. Something fancy, with people dressed up in suits and ties. The location could make or break the concept. If not done properly it could look cheap.

I set out to find a location that could accommodate the concept, and I found it increasingly hard to find a legitimate restaurant that would let us shoot there. When shooting inside a real restaurant, you have to completely shut down that establishment for the day because you can't tell people "Okay, shut up, we're rolling" and expect them to listen, they just won't do it. You have to shut it down, which usually costs a lot of money.

I scouted a few locations, but none of them had the amount of space, ability to close for a full day for our budget and had the look I was going for.

I decided to find an empty room that we could dress to look like a restaurant. I found a few locations like a Masonic Lodge, an events hall, and a few churches that had meeting halls. The Masonic Lodges typically only cater to their members, so that was out. The events halls were rentable but were extremely costly and out of the budget. The churches seemed to cater more towards the small budget and crew that we had, so we decided to go with one of them.

We shot inside a medium sized room that they typically use as a daycare or Sunday School room. In fact, a lot of the Sunday School furniture and decorations were still in the room while we shot and were just moved off to the side.

At the last minute, the church called and told me that they had double booked that room for the day we had scheduled, and that the only time available was at night. So we ended up changing to a night shoot last minute. We loaded in around 8 PM at night, and had to be out by 7 AM the next morning. Luckily my cast and crew worked extremely fast and we wrapped at 3 AM.

[You can see in the photos some of the decorations] 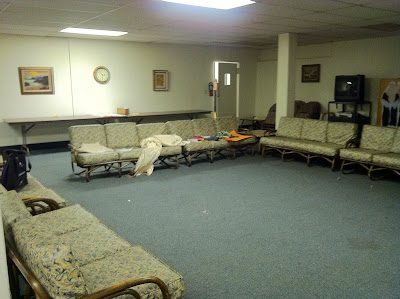 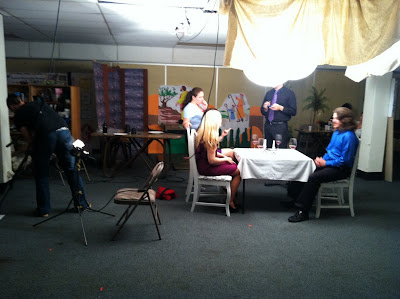 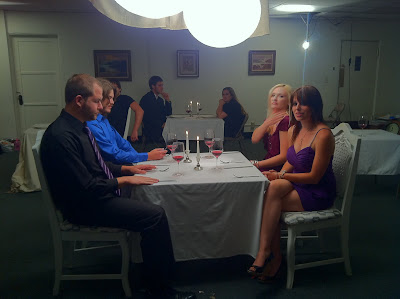 On the topic of the location, I wanted to touch base on the lighting and production design choices.

We wanted to design the room to look like a restaurant, which meant stay as far away from the bad looking carpet as we could, while bringing in as many tables with tablecloths as we could. We ended up bringing in folding card table and dressing them with a white tablecloth. It had the look we were going for, and unless you looked close, you couldn't tell.

I made the choice early on to have the jerk character (the one on the phone) stand out a little more from the others, this meant casting someone that looked a little out of place and also to dress him to catch the viewers eye early. This is why he is in blue while everyone else is in purple.

The color pallet was analogous colors of purple to signify the romance in the air. Purple has always been a very romantic color to me.

I spent a lot of time on the color pallet, production and set design. I wanted to make the foreground actors stand out more, so I dressed them in purple and blues and kept the background in all black and white. This desaturated the background and kept the entire frame looking nice. Even the color of the wine was a choice we made, it's a purple to match the dresses. (Actually, it's grape juice.)

I had my wonderful costume designer, Joyce Tom, shop for the costumes and pick out three outfits for each character. We didn't have time to look at them before the day of production, I've always had the upmost trust in her after working with her on numerous films in the past few years. She didn't disappointment me this time either, and picked out two incredibly sexy dresses.

My director of photography was Jon Meredith, a incredibly creative and smart cinematographer. Luckily, the church had a drop ceiling, so we decided to light the foreground with china balls. The entire foreground scene was lit with two 24" china balls. The background was lit with a few very low wattage lights hanging from the ceiling in a very smart way that Jon came up with (using the legs of the light stands to open inside the ceiling.)

Those china balls can get VERY bright and spread around easily, so Jon hung some sheets next to them in order to stop the light from spreading to the background too much.

What went into casting?

Casting was fairly straight forward. I had met Michael Vinton a few years ago when I cast him in a short thriller film I produced in 2009. He had been changing the direction of his career to comedy, and I felt like he was perfect for the role of the fake doctor.

I had worked with the girl on the right, Laura Saggers, in the past as well. She is magnificently talented and had the look I was going for. Plus she is incredibly easy to work with, which made my life so much easier on set.

The girl on the left was a last minute addition, I had cast a girl for that role but she had to back out when we changed the time of the shoot from a day to a night shoot. Her name is Tanya Camburn, and she is very talented and understanding both in the time of the shoot and on the set. Her part was entirely based on reactions, so she wasn't able to really stretch her range but the reactions that she gave me really made the spot that much more funny.

Lastly, the jerk character is actually my brother, Matthew Leisher, who is an incredibly talented musician and stand up comedian. I felt that he could pull off the dirt bag character really well. The jerk is such a crucial character that I didn't want to cast that character without looking around first. I actually had Matthew audition for the part with a few others from an open casting call, and he blew them out of the water.

The background casting was primarily friends or friends of friends who had the proper clothing and could come down and stick around for 10 hours, which I am incredibly grateful for. All of the background actors were dressed in their own clothing, and everything they had brought was perfect.

I really like to focus on the characters, and I feel like I cast actors that were able to portray them incredible well. This is a very character dependent spot, and I am very proud of my cast for their performances.

Thoughts on directing it?

I absolutely loved directing this spot. The concept was brilliant and the comedy was really fun to work with. I like to make my sets as fun as possible and this concept really allowed me to do that. It allowed me to keep the laughter rolling, even between takes.

Part of the process of this concept was rewriting the script. I'm a perfectionist when it comes to my dialogue. When I read the concept I felt it was funny, but the dialogue could have been improved. Dan Sorgen, the genius copywriter, and I spent a lot of time--arguably too much time--working on the dialogue until it flowed the way we wanted. We went through a lot of iterations and rewrites until we both came to a place that we liked. Dan was incredibly patient, helpful and creative when it came to the rewrites and if not for him this spot would not be as funny as it is.

The actors were brilliant and great to work with, Laura and Michael's reactions made this spot what it was and I am so grateful to them for being a part of this.

My crew was great, I have been working with some of them for a few years now. I'm very grateful to my assistant director Joseph McPhillips, my location manager and associate producer Lauren Peters, my incredibly talented director of photography Jon Meredith and the always clutch costume designer Joyce Tom. Without them (and, of course, my wife) I could not have made this spot as well as I did. I am infinitely in their debt.
Posted by SpecBank.com at 9:00 PM No comments: