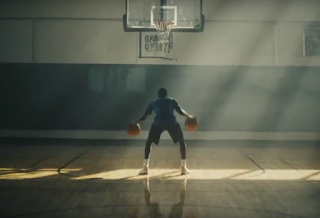 I really wanted to do a spot that lent the opportunity to use expressive film techniques to tell a great story. I'm looking to build a reel that features those two skills and I'm pretty happy with how the first effort came together.

As for the script, the VO made me want to get up and run a marathon so it was a lot of fun to take that energy and put it into this spot so hopefully someone else feels it too.

I put up an ad on BackStage and poured through headshots until I found the person who was the one. Once I found him, we met at a gym and played HORSE and just talked for a bit. I've found that taking that extra time really helps out a lot and opens up lines of communication that help on set and show in the edit.

I knew we needed to have a few locations to keep up the energy and interest in a 60 second edit. I'm based in Brooklyn and after deciding on the brand I thought would be interested in this spec, it seemed that all the locations I'd need were right around my apartment. Once I had some options, my DP and I scouted to find which would be best for camera and the time of day that we were shooting. As for locking them, the only money I really had to spend was the gym. To me, it was worth it knowing we would be getting the lighting the way we wanted it in the morning. Everything else I was able to get for free or with the support of some friends.

I'm really close with my DP. We've been working on sets together since freshman year of college and are both looking to break into similar areas of the industry. We talked about the script and what we wanted to do and he did an incredible job. The rest of the crew was people we knew who were generous enough to help.

We shot over a 2-day period on the weekend. It was a small crew on set so moving our equipment around was a bit labor intensive, but otherwise we really didn't have any issues that threatened what we wanted to accomplish which I'm very grateful for.

I come from a heavy post background so I felt really comfortable in the edit. I love diving into the footage and seeing what works and what doesn't. Every piece has it's challenges but it's always fun to cut something based on your interpretation and see how it lands. Luckily, the brand Point 3 Basketball felt strongly enough to run in on their channels, so that definitely felt validating.

When it was time for finishing, we showed the spots to some people who we were hoping would be interested and luckily they agreed. Josh is an amazing colorist so for him to say yes felt like a huge win. Tom who did the sound design and mix was someone I found based on an entry he made to an industry competition. I thought the spot he placed for lined up with what our spot was doing and he also agreed, then totally knocked it out. It was great working with both of them.

I'm not sure if I would have done much differently in terms of producing this, but taking a project from start to finish definitely helps shine a light on your own tendencies as a director. For anything I do moving forward, I think having a great understanding of the relationship between the script, images, and viewer is something I'll constantly be thinking about and looking to explore with on future projects.
Posted by SpecBank.com at 3:50 PM