Under Armour "Chin Down" 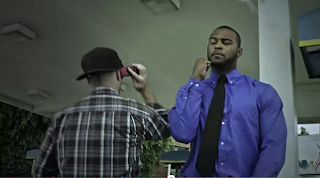 This concept connected with me for several reasons. Not only was I a fan of the previousUnder Armour work (most notably the Peter Berg directed spots), but I am also an avid sports fan. This was the type of high impact visual filmmaking I see myself doing in the future so it seemed like a great fit to shoot this type of concept.

We invited a series of people with boxing and non boxing experience and had them shadow box and showcase their physical ability. The ones that had boxing experience obviously went to the front of the line, but their look was equally important as well. We ended up using Mike, who was a semi--pro football player and had the right build and Kevin who was a former college football player and actor. They both did a great job and worked like crazy to pull of their performances. James the trainer was perfect because he had both the look and previous experience training as a boxer when he was a child. He really helped us keep the shoot authentic and kept everything together so I really owe him a huge debt of gratitude for that. Throughout the whole shoot he was coaching both boxers on how to seem convincing so he really was acting as a trainer.

I had a friend who promotes MMA fights and who is good friend with a boxing trainer at the local gym next to him. After meet with them and telling the gym what we were trying to do they were very cool and supportive. We are also talking to them about possibly shooting a documentary about the gym owner's son, who is a young rising amateur boxer in the featherweight division.

Not only has Jesse worked with me on several music videos in the past and another spec, but he was fully invested in the project so I knew he was my man. He also did a lot of research to recreate the look of the previous spots and create something we could call our own. My producer Ari has a lot of crew connections and people that he regularly works with so finding the rest of the crew was easy.

Shooting was great. We were up against the clock since the gym owners wanted us out by a certain time and we ended up running a bit late since I split the shoot day and crew with another director friend of mine to save money. Despite this we got everything we needed so I can't complain.

The post process was challenging but we managed to get through. I encountered an issue with the Alexa firmware being outddated which caused a lot of problems with Final Cut, but we finally got it sorted. We colored with Magic Bullet and I was very happy with the final product.

The only thing I would've done differently would be to have them connect harder on the final punch, but I think I was already pushing my luck getting two unexperienced boxers to hit each other like that. Mike is a big guy and if he really threw his weight behind his fists, he probably would've broken Kevin's jaw, so I can't complain.
Posted by SpecBank.com at 11:37 PM