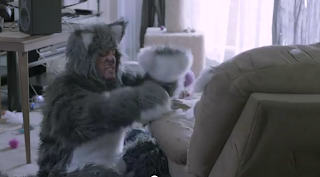 David sent me this script after we had such a rad experience doing "Peanut Butter" together. At first glance, I loved how open-ended the idea was. It was concise, imaginative, but open to a lot of interpretation. David and I, having worked together before, were almost instantly on the same page about what exactly this hybrid cat/man would look like. He really let me run with how I wanted him to be played and what kind of things this guy would be doing. Then we got into deeper levels of understanding with imaginative backstory and what made this guy tick which presented lots of opportunity for discovery once we got on set. Pre-pro on this one was a lot of fun. In terms of how it reflects my vision, I tend to be drawn to these "odd-reality" type scenarios, especially ones surrounding a singular character. I think the fact that this concept sunk up with what I'm drawn too, coupled with working with a familiar voice in David, made for the right scenario to pull this thing off.

Casting was easy-breezy. My buddy Ben Goldberg (Catman) and I had been talking about working together for about a year before I set the pre-production wheels in motion. I told him about the script, we did some rehearsal and research together (mostly cat videos on youtube) and we were both on the same page right away. I think he rocked it. Ben Morrison, who plays the roomate, was a friend of a friend who I randomly saw do a set at Hollywood Improv just weeks before the shoot. I knew it the moment he opened his mouth and the next day we spoke on the phone and he agreed to be a part of it. Iyad Hajjaj, who plays the store clerk was fantastic. We found him on LA Casting, auditioned him and he clearly had a knack for comedic improv. He was a blast to work with; they all were.

My producer, Minh Dao, got a number from me and just went gangbusters around Burbank to find us a liquor store. He found this little spot off of Buena Vista, made the price right, and we nabbed it. It took about a week. The apartment was Minh's home. It was really great of him to let us shoot there and most importantly, let my production designer "destroy" it to get that look we wanted.

I've been working with this rockstar Spanish cinematographer, Juan M.R. Luna, since he gaffed a music video I directed a couple years back. He's got an awesome personality and european sensibilities which I love having on set. We feed off each other and most of the time minimal words are exchanged between us about a given setup; we speak the same visual language. He's one of my favorite people to work with in this crazy town. Minh Dao, my producer and oldest friend in Los Angeles, is one of the best there is. He's got a "get it done no matter what" attitude and he's always got my back which is invaluable as a director. We found Brian Phillips, the costumer, on craigslist and his drawings were spot-on with my vision of the character. We met a few times and each visit the suit became more and more impressive and he was super responsive to some of my suggestions along the way. It was a great experience and I'd recommend him to anyone. The rest of the crew was a mashing of people I have and haven't worked with in the past but they were all kick-ass and it was a great vibe on set.

Shooting was super fun. The liquor store took about 2 hours total, setup to hard out, which was great. We really went to town on the second day shooting for about 6 hours inside the apartment location. I shot way more footage than I could ever use in a 30, which is why I did a 60 as well! It was great to have a lengthy list of different ideas for what Catman might do. Once Sam, our production designer, had the whole place set, we just had at it getting as much as we could. Some of it worked, some didn't, but being prepared and having lots of options in terms of ideas and props was key. The biggest challenge? Keeping crew from laughing mid-take. That's the best kind of problem there is in my mind.

I had this spot, as well as another that I wrote, going concurrently in post production. The other one was very VFX intensive and more of a linear story so I had an editor on that one and I decided to edit Catman myself. I cut about eight different 30 second versions before deciding on the one you see here. Lucky for me, my Clark Kent (day job) is in post production so I'm pretty familiar with editing and workflow over all. We shot Alexa and I cut on Media Composer 6, did all the GFX in CS5, conformed at 10-Bit DNX220 and bangaranged right into an Avid Symphony for color correction with my buddy and colorist Jan Janotta. It was a buttery-smooth experience.

I would have drank less 5 hour energy; probably like 2.5 hours worth and slept a bit more between shooting days.

We shot this spot and another completely different spot over a 2 day crazy marathon. If you're spending the money for all that gear, insurance, food, and crew why not? Just make sure you're extra prepared as a director and you've got some really organize people on your squad- there's no room for a mega-mess when you're cross-pollenating 2 shoots. Check out my website www.WhoTheHellisTim.com for the other spot we shot for Cheetos called "The Ginger".
Posted by SpecBank.com at 10:27 PM