Barbecues Galore "Too Many Cooks" 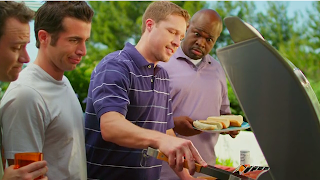 To me, it's all about story. I love story, and it feels like a lot of spots don't have much in that department, anymore. I also love a dry sense of humor. Daniel's script completely delivered, and he's a heck of a nice guy, too. This is the first spec script I ever "reserved" on SpecBank, and I remember meeting Daniel- I was so nervous! He set me at ease, and we got along great. Back to the script, I made only one small change, with Daniel's blessing: I changed the "final straw" character to our hero's wife in the story. Daniel's script had everything, and I knew when I read it that this would be a fun shoot. I was right.

Casting was awesome! I'd just finished casting for my SAG short film "Unlaced", which is a very intense drama. This was a great project to cast right after that- it blew all the seriousness out the window. I'd always had a specific actor in mind for the lead, and got him- Matthew's been on TV in a show called Diagnosis X, and he's starred in a couple of indie features since then. He's an "All-American", "Everyman" kind of guy, and I built the cast around him. I knew from the start I wanted an actor exactly like Maurice, too- the guy whose eyes bug out as he finds out our hero isn't using foil. Maurice nailed it, from the start. I think I offered him the role on the spot, during casting. Our other two male actors were surprises to me, I wasn't exactly sure what we'd get, although I had a pretty set breakdown for them. Randy and John delivered our "grill geek" and "grill jock" roles perfectly. And of course, I can't forget Liz, our hero's wife. She, too, was awesome. The whole thing was an ensemble piece, and a ton of fun- that's another thing you rarely get with spots these days.

How did you search for a location?

I shot it in my backyard. My neighbors are industry people, so they didn't call the cops.

I DP'd. I almost always do, I'm very hands-on as a filmmaker. My crew was basically the same 2-3 people I'd been working with on "real world" gigs for a couple of years.

It went great! LA weather is crazy beautiful most of the time. I threw up a nice big butterfly to cut the sun a bit, used some lights and reflectors, and that was our lighting setup. It was a lot more about cutting and controlling light than adding. We did spend a fair amount of time on the production design- that was a big part of my producer's second hat she had to wear. Kathi's just an excellent producer. Full disclosure, she's also my wife, and we work together on projects all the time. As far as actually rolling, so much of this spot was about timing. With Kathi and me also being musicians, that came pretty naturally.

Nope. I know that sounds a little cocky, but no, I wouldn't. The spot looks like a million bucks, and I made it for a couple of grand. I've been hired as a commercial director already thanks to this spot. Daniel wrote a great story, and I think everyone involved really hit it out of the park.
Posted by SpecBank.com at 8:23 PM