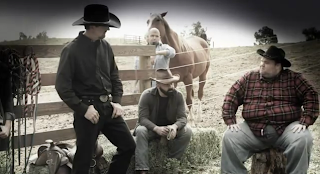 Why this script/concept? How does it reflect your vision as a commercial director?
The thing that appealed to me in this script is the comedy dynamic of rough and tumble cowboys talking about tofu and then the tag being - The West was not Won by Tofu Eaters.  It made me laugh out loud so I wanted to run with it.  I like that sort of push/pull in my comedy and this script hit the nail perfectly for me.

What was the casting process like?
The casting was a smooth process.  I used a couple of the online casting agencies and from there picked actors who fit the idea I had in my head for each character.  I had a whole scenario of what was happening beyond what was indicated in the script.  Then from there I called a number of the actors in for an interview and a read.  The day before the shoot one of the cast members had a family emergency and was unable to come.  I went back to the original casting and found my first alternate pick and luckily he was still available on the shooting day.  Although either actor would have been wonderful, the actor who came in at the last minute, Rod James, was fantastic.

How did you search for/lock a location?
The script took place on a ranch and I have shot at this particular location before.  Although it is a full on horse ranch it is very local, just up the hill on Malibu.  It's a very malleable location with breathtaking views of the Pacific as well as the ranch property with horses, alpacas and other animals.  Brian Goldberg who owns the property, called Rancho Miramar, is a great guy and is very accommodating.  I can highly recommend it as a great place to shoot.

How did you select your DP, crew?
It was pretty easy since it was mostly me!  My wife and I co-produce and I have a small group of go-to pros that I use consistently on projects.  I made a few calls and we were ready to roll.

How did shooting go? Any challenges?
It was a great shoot.  The actors were inventive and easy to direct. The horses were friendly and hung out amongst the actors as we shot. The biggest challenge was the manure!  Needless to say there was a lot of it around so I suggested that everyone involved wear boots.  Daniel Gray, the author, also came to the shoot.  He made a couple of text changes during the shoot that made the spot even better.  It was great to have him there to consult.

Tell us about editing and finishing.
I edited and graded the spot myself.  I use FCP 7 and shot on a Canon DSLR.  After transcoding all the h.264 shots I then sync'd up the location audio with the takes.  From there I strung it all out and made notes on my preferred takes.  I assembled a rough edit and then fine tuned from there.  The grading and final picture took the longest.  I wanted to create a "look" for the piece so it took many iterations to make the one I wanted.  I am a professional sound designer and I have designed and mixed many spots over the years.  The soundtrack's biggest hurdle was the music track.  Although I could have ripped off a Sergio Leone/Ennio Morricone track I wouldn't do that.  I sourced it from a music library but had a tough time finding a cue that met my needs. Eventually I found the first cue that's in there and I was able to edit it to be closer to what I needed.  I added some additional recordings we made on the set of the animals and the environment and then I finalized the mix and married it to the final graded picture.

In retrospect, is there anything you would have done differently?
If it was a paying gig and had a decent budget I would have removed myself from some of the duties!  I would have certainly hired a DP at least.  It's tough to shoot and direct at the same time because you can miss little things the actors are doing in their performance that you can later riff on.  Fortunately even though I was obsessing on the focus and on the lighting wearing the DP hat, I was also focused on the performances wearing the director hat. Thomas Stroppel was doing a great head nod in one of the wide takes in reaction to another character's line.   Later I shot a single of his head nod as a pick up knowing that, wearing the editor cap, that I would be able to cut that in as a reaction shot.  Sometimes doing more than one thing in filmmaking helps and sometimes you can miss the little things when forced to wear too many hats.

Any other thoughts.
I have a lot of experience in several different aspects of filmmaking. The one where I need assistance is in the writing.  As a director I want only the best material and most of the time its not something I've written. Having a resource like Spec Bank is essential for me because I can go to a library of wonderful scripts and then collaborate on something that I know has, at least a chance, to shine because it started with a great script.